HELL of a STORY 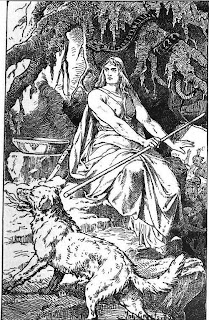 What if the word "hell" came from an old English word or hele which was supposed to mean, a hole in the ground. Meaning that when a person die, the body goes to hele/hole in the ground and that's the end of that. No more, kaput, done, it’s over. The last thing a dying person will see is a dark empty space once the body ceased to live. Those worthy enough to will able to see further light and will continue to live and received his/her blessing.

What if the hell as we "knew it" or been taught as the place for torture and endless suffering, pain and misery is a relatively modern invention. I will venture to say that hell is a product of a very inventive and twisted mind. The very idea of eternal pain to be administered by a Loving God doesn't make any sense. How can a Deity could exists while multitude of His creation is being tortured endlessly for failing to be god-like, for being a human saddled with its inherent weakness. It is not a secret that in order to be worthy of an access to the Eternal Life is living in a way that approximates to be a godly, to be able to act and think as almost god Himself. That's a very tall order and for the majority of us, it will take a lifetime of struggle to be even close to what expected of us. Christian fundamentalist will object in that statement since they believe that they don't have to do ANYTHING except to "believe in Him." That's another topic of itself and I will not argue with that in this column. All I'll say for now is that being proactive has its merit.

There was a time in human history when people needs to be frighten to do what the leaders wanted them to do. A state/church can hardly sponsor a system when a prospect of dying will end their subject suffering. People commit suicide for "being tired and wanted to end their personal suffering." What a better way to control their subjects is by inculcating to their minds that endless misery awaits them even after death. Or the other way around, what a better way to ask their followers to die for the cause since there is a reward after death. Ask the "insurgents" in Falluja and they'll tell you about nine virgins waiting for the martyrs in their version of heaven.

To wrap this commentary up, nobody came back from death as an eyewitness and described the existence of Heaven, as well as Hell. People will believe what they want to believe. It is my hope that people should not readily accept what is/was being feed to them. To paraphrase the Worshipful Master Bryan Cochran, Master of the Hanford Lodge No. 279 that "tradition does not automatically mean it's the right answer to the right question." There is always the other side of the coin. I tend to believe that there is life after death to account for deeds done on this life. White balls elect, cube balls reject. Be careful how you live. Hell could means--- lights out. Good Night.

"Hel" (1889) by Johannes Gehrts. Hel, the female being, holding a staff, and flanked by what is presumably the hound Garmr - both atop a cliff's ledge. In the background, a serpent crawls around among roots, a basin sits, and partially shadowed figures appear to be in movement below the cliff. From Wikipedia, the free encyclopedia.