Before we indulged ourselves with ever familiar self-flagellation, let us consider that division among Brethren especially in Grand Lodge level political arena is not confined to the Philippines and undoubtedly not a Filipino invention. What can be noted is that the political environment of certain Grand Lodge is a reflection of the existing governmental apparatus where political connection is the name of the game. An environment that espouses manipulation by few elite to advance the welfare of anointed padrinos and squashing those who dared to raise their voices or cry for justice is a preordained eventuality. This scenario is not a new issue. As my grandmother used to say, “lumang tugtugin na iyan” i.e. it’s an old song.

I concurred with the idea of multiple Grand Lodges co-existing and truly practicing the tenets of our Craft. If multiple Lodges can exists in one building, why it is so hard to practice tolerance at “higher” Grand Lodge level? Fear of losing power, prestige, and for some, access to annual dues is a worldwide issue not just to certain locality.

“Why only one Grand Lodge can exist in the Philippines? Why not? Removing the prejudicial thinking of the motive, be it may imagine or reality, Freemasonry spread around the world not because a Grand Lodge “authorized” the creation of another Grand Lodge but because three or more Lodges banded together and formed their own. Neither Modern nor Ancient Grand Lodges of England authorizes the creation of Grand Lodge of New York or Pennsylvania or California to form Nevada.” Why Not.

For Brethren who are interested in history of Philippine Masonry, it is fitting to suggest and give consideration to the point of view of the Brethren who don’t believe in Andrew Jackson’s “To the victors belong the spoils” in regards to Masonic history of the Philippines. History of Supremo Consejo del Grado 33 Para Filipinas. 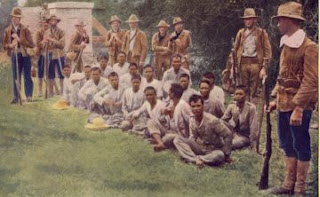 Serious student of history will discern that an American-sponsored Grand Lodge in the Philippines has many advantages in the aftermath of pacification campaign during "Philippine Insurrection." Not only that the American Grand Master could keep tab on subordinate Lodges but can expect members loyalty to American influenced/brand of Freemasonry. One doesn’t have to be a rocket scientist to figure out the threat (imagined or real) of groups of former "insurrectionists" which includes "rebel" General Emilio Aguinaldo meeting regularly in secured venues. General Douglas MacArthur was quoted that Freemasonry is a useful tool to pacify Japan by adopting Freemasonry for Japanese men. One should not have to guess who was "patron" General/Viceroy/saint of Grand Lodge of Japan.

Geo-political issues aside, it is a fact that in large cities, multiple Lodges does exist and meet in the same building. It is a fact that if there is truly harmony within, multiple Masonic Lodges are not needed nor justified. Lodges that meets members expectations will flourish and Lodges that don’t will and indeed slowly fade away. This scenario is also applicable to Grand Lodges. Those with substance will endure hardship and tribulation regardless of how rough and rugged road the travel offers while buildings not made from "good, true, and square work" will not last for so long. “Time, patience, and perseverance will accomplish all things.”

There are those who define Freemasonry as a Fraternity of select few hence, embrace the concept of them or us while there are those who view the Craft as a moral system reserved only for male gender. And there are some who are trying to reach into the darkness of their own soul to seek a glimmer of hope that the Order is path toward illumination to immortality. The Brethren will define and see Freemasonry through the filters of each own choosing therefore, division among men and Brothers are expected among mortals. One could hope that there is enough sand in the hourglass to realize the fallacy of vanity and embrace the joy of tolerance among creatures --- big or small.