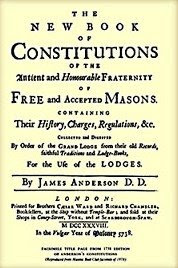 “Old Charges” defined by RWB Daniel Doron, PGDC, Grand Lodge of Israel as “the name given to certain manuscripts having more or less the same contents. It is a term which is used to characterize 131 manuscripts, the oldest of which is "Regius" dated 1390."

Anderson’s Constitutions of 1723, contained history, charges and regulations, “extracted from the ancient records of lodges beyond sea, and of those in England, Scotland and Ireland, for the use of the Lodges in London.” Article XXXIX deals with Grand Lodge power and authority to create new regulations, “...provided that the old Land-Marks be carefully prefervd.”

Brother Albert Mackey, in an attempt to define what the “old Land-Marks” are, wrote The Landmarks or the Unwritten Law in 1874 which, drew stinging remarks from Brother Albert Pike in his 1888 Opinion of Mackey’s Landmarks published in the proceeding of the Masonic Veteran Association. What became known as Mackeys’s Twenty Five Landmarks was not a universally accepted as the true all encompassing “Ancient Landmarks.” In 1946, Brother Silas H. Shepherd, listed the different levels of acceptance of Twenty Five Landmarks by the U.S. Grand Lodges in the Book One of Little Masonic Library, The Landmarks of Freemasonry.

Being aware of the terms and the general nature of Ancient Landmarks and Old Charges, the term “Ancient Charges” seems to be another name of Anderson’s Constitutions of 1723. The reading of these charges during the Master of the Lodge installation also confirms the issue. Having to consider the lingering doubts surrounding the creation and adoption of the Constitutions of 1723, also known as Ancient Charges, this student is now perplexed to the idea that the document in question can provide further light for discovery of the “foundation on which Freemasonry is built." (Brother Nelson King, Editor, The Philalethes Society, 2006).

Brother Lionel Vilbert, PM, Quatuor Coronati Lodge No. 2976 analysis of Anderson’s Constitutions of 1723 bought out interesting subject such as, the yet to determined when and where the Reverend Doctor was initiated or what Lodge in London he was supposed to be a Master in 1722; missing record of Anderson involvement with Grand Lodge before the Duke of Montagu became the Grand Master. The report went on to state that the Reverend “was not even present at the Duke’s installation.”

WB Vilbert postulated that “Anderson undertook to write the work as a private venture of his own and that this was sanctioned, since it was desirable that the Regulations at least should be published, without any very careful examination of his text, or so much of it was ready, and that he had taken what were felt by many to be unwarrantable liberties not only with the traditional Charges but also with Payne’s Regulations.”

The analysis concluded with a paragraph titled as “Our Debt to Anderson.” After illuminating host of discrepancies, the WB Vilbert reminds us/students not to be too harsh to make judgment. After all, the omission, addition and/ or twisting of some texts resulted the “universality today to its (Craft) wide undenominationalism and in this respect he (Anderson) builded better than he knew. The Constitutions of 1723 remains one of our most important text…” If this student will agree to this reason, then perhaps a suggestion for modification to Brother King’s statement could be entertained as to read, “Anderson’s Constitutions of 1723 as the foundation on which Freemasonry became.”