Rizal and Quezon: Freemasons or Not?


Does Rizal really denounced freemasonry during his trial in Fort Santiago? --- Bro Erick

First allow me to say that in no way shape or form that I can be considered as a historian nor subject master expert on Jose "Rizal" Mercado's biography. Having said that it is just fair to say that Bro Jose's last minute "retraction" of Freemasonry and/or returning back to fold of Catholic dogma is still being debated by experts. The "evidence" presented by the Church is being contested for its validity. In his fourteen paragraph Ultimo Adios, Bro Jose mentioned God twice and never by His name. The Catholic Dogma is very clear in regards to naming Name. Unlike Manuel Quezon, PGM who in August 1930 demitted not only from his Lodge but was on the record that he "resigned" from the Fraternity because of Masonic and Catholic ideology conflict. Now why is that "small" detail was not even hinted nor mentioned in the official History of Philippine Masonry published and sanctioned by the Grand Lodge of the Philippines? 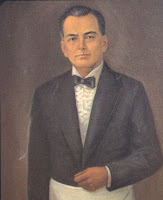 As a young veteran Manuel L Quezon, the future first Filipino Grand Master of GLP was "taken under the wings" of American Freemasons. His meteoric political flight from the rank of Major during revolution to Presidency of the Commonwealth of the Philippines was not a matter of luck or chances. If we are to believe that his rediscovered religion guided him to the places he was in then we ought to consider whose hands actually placed him where he can assert his "calling." We should not be naïve to remember that during Quezon's period, American expansionism policy influenced every political, economic, and military affair of the islands. Although the official version of the cause of returning to Catholic Church was due to his children, it could be postulated that Quezon's resignation from Freemasonry in 1930 was a political statement to the Americans that he was no longer bound to American policy. Being an ardent nationalist, Quezon was possibly thinking about his other children--- the Filipino people. One could also wonder if Philippines would fare better in terms of pre- WW2 American military and economic aid from Bro Franklin Roosevelt Administration had Quezon did not demitted from the Craft.

There is a lesson in the Prince of Royal Secret degree or better known as 32 Degree of Scotish Rite that emphasized the importance of balance in our life. To achieve equilibrium is to maintain harmony, to support harmony there must be Truth and without Truth there is no Justice.

I salute those who fought for truth to achieve justice, may you find your equilibrium hence, harmony of your spirit. You know who you are as He is what He said He is. I thank the Brother for the nice words.

**reposted from West to East Yahoogroup.