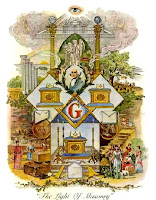 It is true that variations exist between jurisdictions and Brother Fred captured the most common American way or mechanics of petitioning to receive degrees in mainstream Freemasonry. Let us not get wrapped around the axle in discussing who and what non-”mainstream” Freemasonry are nor the asking as recruiting as these are separate topics by itself. The subject is about joining the Fraternity because of "wanting to emulate a great man."

Great number of past and present Brethren petitioned to receive degrees of the Craft for the same great number of reasons e.g. self-improvement, philosophical, family tradition, mysticism, networking, and yes, even "mercenary motives." The people who made up of the Craft are as diverse as the reasons of petitioning therefore, if one would look closely one would find chinks in Masonic armor. Many true and worthy Brothers are/were attracted for the same reason as stated by the inquirer. It is not surprising as in most likelihood, these true and worthy Brother Masons are the stamina of the raison d'être why the Fraternity exists for sometime. These are the individuals who comprehend that Freemasonry is not about carrying dues card in their wallet, possessing signet ring nor bumper stickers with square and compass. These are the Brethren who by the abiding the Tenets of Freemasonry made significant impact to younger generation thereby planting the seed of future true and worthy Brother of the Craft. To them past and present, we owe them respect and gratitude.

In American system of membership protocol, the inquirer already had a jump start as he was asked if he wanted to be a Mason. This is a significant revelation that will certainly be wrestled by investigating committee. Nevertheless, for over a decade of contemplating what it takes to "join," the inquirer was probably surprised that all it take to get started is to simply --- ask.

One doesn’t have to be a Mason to be a good man. Many religious entities will attest to this statement therefore, being a Mason to give respect to someone is NOT a valid reason to be a true and worthy Brother of the Craft. Ideally, one knocks on the door of Freemasonry because of his own free will and accord not because of any other reason(s) however noble or appreciative sounding motivation it might be. There are pledges to be made, actions to be scrutinized, obligations to be met --- Freemasonry is not just a Fraternity. To be a true and worthy Mason is not supposed to be measured in how many degrees completed, decorations embroidered on apron or jewels hanging on the neck. Being a Mason doesn’t necessarily meant good person. It simply meant a mortal being traveling through rough and rugged road of life toward the Ark anchored within the sheltered harbor there to finally unload the baggage of imperfection known as human flaws. Freemasons do not own nor monopolize the road to illumination.

Albert Pike wrote in 1888, that Freemasonry “is a system of morality veiled in allegories and illustrated by symbols.” If I may be allowed to paraphrase a well respected and wise Mason who once wrote that “one join a Lodge not Freemasonry.” The Past Master of Benjamin B. French Lodge No. 15 in Washington DC, Brother Ken Giballa was pointing out that Freemasonry is more than a group of individuals with same interest--- it is an ideal that “makes good men a better man.” There are pre-qualifications to be fulfilled and one doesn’t become true and worthy Brother of the Craft on the account of joining the group. One doesn’t have to be a Mason to be a good man but it requires good man to be a true and worthy Mason.

To Bill L, if you want to honor your grandfather, continue to be a good man and petition to join a Lodge only because you wanted to not because of your grandfather. The Craft and your role model will indeed understand what you meant to say or do. Ask yourself what are you really looking for --- what are you in search of that you think you'll find within the circumference of a notion known as Freemasonry? What came you here to do? Only one person can truly answer that question and he won't be your role model.