History as we already know is documented events and agreed upon by historians. Because event(s) did not make it on the word processor, paper, papyrus or slab of stone doesn't mean that the said event(s) did not happen. Lomas and Knight's theory of the origin of our Craft is one of many that float around. Controversial to say the least but thought provoking to many including you and me. Born in Blood was written by medieval historian John J. Robinson who also wrote a detailed history of Templars in his Knights Templar and the Crusade book. Bro. Robinson's theory of origin of Freemasonry to me, is more convincing than Lomas and Knight. As an example, Robinson's explanation of ancient French words that was eventually translated/corrupted into English such as "frere" for brother became "free" thus freemason from original's brother mason.

There are hundreds of books authored by hundreds of convincing and not-so convincing writers. What book to read will depend on what may interest the readers. As a historian John J. Robinson's Born In Blood is akin to reading history book, Lomas and Knight's Hiram series has a good number of speculations, and Laurence Gardner's Shadow of Solomon's has more technical description. Chris Hodapp's Freemasonry for Dummies is easy to read, and then we have anti-masonic series like Stephen Knight’s The Brotherhood. Manly Hall's Lost Secret of Freemasonry was written before he became a Mason while Albert Pike's Morals and Dogma was his grand opus. John R. Heisner’s most recent Advanced Meditations on Masonic Symbolism is his interpretation of familiar symbols we heard and see inside the Lodge. Most readers find topics as the primary requirement and authors as secondary, some preferred the other way around. The bottom line is that the material should be interesting e.g. subject, author, etc., or else the book will be as good as a door stop.
Multitude of books were written about our Craft, from expose' to its ties to mysticism written by disgruntled born-again Christians to psychics. Some books gathered dust, some sells like hot cakes. Books like the Hiram Keys, Book of Hiram, Born in Blood, Brotherhood, and others were about Freemasonry, its origins, its past, present and future, those books is NOT about the Craft itself. Those books were written for outsiders who often times (after reading) thought they knew more than the members themselves. This is an interesting phenomenon within our Fraternity. A self perpetuating idea that most of our own Brothers tend believed to be true. I witnessed a Master of the Lodge delivered the 3rd degree lecture in long form and then commented at the closing about a non-mason who knew more about masonry than anybody in the Lodge! As a visiting Brother I just bite my tongue real hard. 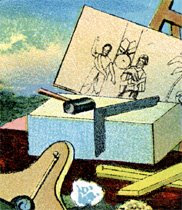 Referring to the study of the Craft, Brother Jim Bantolo, PGM, recently wrote, “There is still so much to read, researched, and to be illumined. So much to digest. So much to understand. So much to feel and see what true Masonry. It is just too much more than simply being Monitorial.” Let us take heed of these words of wisdom. Freemasonry is more than a small group of elite beings who think they are some sort of special. The Craft is more than parroting of arcane ritual lines or participating in an amateurish drama play. It is also embarking on a journey that will take time and patience, of understanding that the travel not the destination is what will matter most. It is about explaining the spots on individual's lambskin apron.

We have heard the lectures in our degrees. The interest to know the meaning of symbols and the message(s) of allegories is a lifelong search. It is truly a search of that which was lost. Although, the study and application of our Craft is a lifetime quest, it has an eternal reward. It is often said that asking for the answer is much easier than knowing the question. So I would say to you to disregard the peripheral noise and concentrate on what is important--- build your own temple using your own tools and available materials in accordance to the drawing upon your Trestle Board. The Lessons or as we called it, Mysteries of Freemasonry are not about who we are but rather what are we, as speculative Masons are building. Unlike operative, we in speculative Masonry are in the trade of building a temple not made by hands but eternal in Heaven. This is the central issue of confusion in the Temple, the clear understanding of what is the raison d'être of Freemasonry. To be able to truly help brothers in building their own edifice, we must be capable of building our own temple--- a master of our own mental and corporeal lodge, our very own temple.

"Masonry is a progressive moral science, divided into different degrees; and as its principles and mystic ceremonies are regularly developed and illustrated, it is intended and hoped that it will leave deep and lasting impression upon your mind."

I commend the Brother for his interest and obvious hunger for furthering his Masonic Light. I am glad to find Brothers who understand that Freemasonry is beyond dues card and rings.