The evolution of our fraternity from operative to speculative has been a subject of countless books, among the latest is the Les Origins de la Franc-Maconnerie: Le secre et le Mateir by Paul Naudon which was translated in English by John Graham in 2005 book titled The Secret of Freemasonry: Its Origins and Connection to the Knights Templar. The operative masons who traveled from places to places to build cathedrals, castles, mansions are obviously from working class. However, we can't dismiss the fact that the masters did enjoy special recognition from the Kings and/or benefactors. The names of the four Lodges which bonded together in 1717 to form a unifying body which, later called as Grand Lodge of London, might give us the indication of member's position or class. Names such as The Crown, The Apple Tree, The Runner and The Grapes, and The Goose and Gridiron were the names of the taverns where they held their meetings. Taverns not castle or mansions suggest that the assertion of a "higher class only" might be a subject of debate. The gradual take over of the non-operative members transformed the Craft into what we known as speculative Masonry. The transformation from physical building of operatives to creating an edifice "made not by hand eternal in Heaven" by speculative Masons comes with what the WBrother correctly described as the "social changes that flows with history."

The question of "having our own" is somewhat puzzling. Are we a part of a Fraternity with a regulatory body duly recognized by other regular Grand Lodges world-wide? If the question is about local spawned group as the "Sons of Lapu-lapu" suggests, I believe there are host of group like that such as Knights of Rizal, Barangay Tanod, etc. In our local/Philippine history, there was an organization patterned after Freemasonry. It is not surprising since the influential members and leaders were Freemasons themselves. Loosely translated in English it is called the Society of the Bravest, Greatest and Most Honorable Son of the Country which was commonly known as Katipunan. Various groups with countless mission statements are in existence, it only a matter of locating such interest. Membership in any organization is always a matter of personal comfort zone and it does not matter whether it is a local, national or international in scope. 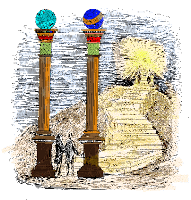 The level of activities and members participation will always depend on each members feeling of being comfortable, at ease within that group. The result is directly proportional to what one has put into it. Being contented as a sideliner watching the things goes by is not as active and fulfilling as being a part of the process. Due to other contemporary living necessities, relatively speaking, most of the time things happened so quickly that there is not enough moment to invite fence-sitters to join in.

Our Craft is composed of multitude of flawed but good men trying to be a better man thus; it is not prefect as no Grand Lodge in this world can be. There is another Grand Lodge presided by the perfect Supreme Grand Master, it is relatively easy to enter but it will take almost super human effort to be accepted as the requirement is to have a spotless apron.
...
Posted by RmOlano at 14:16