Soft night winds bring a bit of chill to the skin yet, nobody really cares. There is warmth from burning logs, cracking as it tumbles down, sending thousands of fiery dust upwards propelled by the breeze. Forest night creatures sing their song, competing and badly losing to a Boy Scout Troop campfire. Forming a loose circle, the boys with their patrol flags slowly waving from the soft breeze, sit on the soft grass while listening to the man we admiringly called, “Sir Frank.” No, this is not medieval times, nor was this man knighted by the Queen of England. He is about five feet and six inches tall, close to one hundred forty pounds with an erect posture. Even from a distance, the scouts know him right away, short clipped graying hair, steady stride, soft spoken nasal voice, and an ever smiling face. He is a familiar sight.

A successful travel business office owner, a former soldier during World War II, Sir Frank is the president of the Olongapo City Boy Scout Council and a father figure to hundreds of elementary and high school Boys Scouts like me. Oh yes, there are many other outstanding, dedicated men and women like, Sir Max, Sir Eli, Mr. and Mrs. Matias, Mr. and Mrs. Mendigorin, Mr. Bautista and many others. But to the young scouts, Sir Frank is different. During times, when heroes are Superman, Batman and other comic characters, boys knew champions with names like, Sir Baden-Powell, Boyce, Daza, Nerick. While these admirable men were undeniable icons, we never met them, let alone spoke to them. To us, Sir Frank is very real. 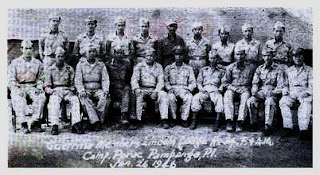 The summer wind gust by, unfurling patrol flags, exposing animal silhouettes that designate the names of the group. Colorful ribbons adorn the flags signifying awards won through competitions. Five groups of boys among friends, twenty eight scouts having fun, learning together and at this moment, quietly watching the man. He is recounting a story of a mother’s last letter from her soldier son about war experiences and of Boy Scouting. As he stands inside a circle of boys and flags, wearing that distinctive khaki boy scout uniform; green neckerchief around the collar held by a leather slide called a wobble, neatly pressed short sleeve shirt with multitude of colorful patches, short pants that stop at exactly four inches from the knee, long cotton green socks with bright green tabs and a pair of shiny low cut black oxford leather shoes, one can clearly see a poster portrait of a leader. Watching him stand and pace around as he narrates the story makes me wonder what it is like to march with him through the jungle of Bataan and Zambales during the fight against the Japanese. Though he never tells us his personal war story, we know his exploits through his son, David, one of my best friends. This humbleness strikes deep down to many boys, unlike some of our leaders that we can pry their war story and be amazed and thrilled, Sir Frank never relates a single incident to us! He just smiles or chuckles here and there, while others tell their story.

As the Scoutmaster gestures as if he is opening the letter from the soldier, my mind is trying to accomplish two things, one is to listen to the story while the other half is asking, how many lives has he saved or how many enemies has he taken. The War Plan Orange B of General Douglas MacArthur called for delaying Japanese through a series of defensible lines so that the bulk of Filipino-American forces could withdraw into Bataan Peninsula. He was part of those forces, the hands that are mimicking the opening of envelop are the same hands that went through the futile battles against overwhelming odds and horror of the infamous Death March that followed after the surrender of the United States Army Forces-Far East. Those wrinkled, bony but strong hands are the same hands that gladly reached out and firmly shook my own when this boy received the highest rank of Boy Scouts of the Philippines. That was a momentous occasion! That was a privilege.

Discharged with the rank of Major in the Infantry after the war, he became a successful businessman. As the United States Navy is the prime employer of the city, he clearly saw the need of a travel agency and founded his firm. To me and many other boys, this foresight is beyond our imagination and simply put, beyond our care, we are just thankful for Sir Frank’s wisdom which gave us a chance to improve our selves through the Scouting Movement. One could only guess how many lives were changed for better because of his wisdom and vision.
Fire is still dancing through the mild breeze while stacked black burnt out logs crashes down, sending again flurries of lighted embers spiraling towards the dark sky. A fascinating scene that lasts only for a heart beat. Unlike the lighted embers of campfires that momentarily light up the black, chilly night, only to disappear in a flash, this wonderful man will remain in my heart forever. Sir Frank, the Scoutmaster and my hero. 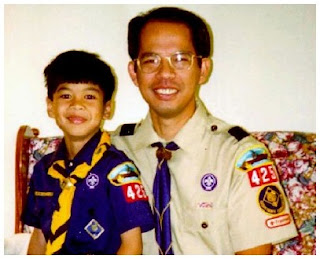 Note:
Though Sir Frank dropped his working tools for sometime now, it is my distinct honor and privilage to call the first man to sign my petition to receive Degrees in Freemasonry a Brother. Brother Francisco Malicsi.

Sir Frank has definitely left a great legacy and taught by example... great to know the legend!